Praise for Chalk and Cheese! 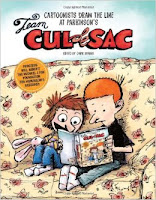 In 2012 Chalk & Cheese was included in the Team Cul de Sac book project, raising money for Parkinson's research in honour of the fabulous cartoonist, Richard Thompson. I was so pleased to be selected and chuffed to bits to share the same initial, and hence spread in the book,  as Calvin & Hobbes creator, Bill Watterson!


The following reviews are for my picture book, Chalk & Cheese (Simon and Schuster)


'Many of  the most endearing friendships in children's literature, from Pooh and Piglet to Laura Seeger's Dog and Bear... turn on the formulaic but charming incongruity of the main characters' personalities; so it is here... Narrative text is brief, and most of the story's momentum is expressed through comic-style panels and speech balloons, which in Cheese's case are often exclamatory and colored cheddar yellow... Children will find his game enthusiasm for everything from subway cockroaches to skating at Rockefeller Center ("Splat!") simply hilarious.'
- Kate McClelland, School Library Journal

'In expansive, humor-laden art, some drawn in cartoon-strip style, the duo gad about New York... There, Cheese hopes he'll get to see King Kong; instead he gets lost, lured away by the aroma of warm nuts...What's best is the sheer exuberance both feel about New York, to which this story is a love letter.'
- Ilene Cooper, Booklist

'an amusing take on friendship in spite of differences as well as a send-up of the idiom and the classic tale of the country and city mice.'
- Yellow Brick Road

'Large, full-page illustrations peppered with word balloons alternate with comic-strip-style panels to tell the pair's story... Children will relate to Cheese's perpetual motion (his ears are constantly aquiver) and enthusiastic lack of restraint as well as his occasional tendency to mispronounce words ("ridiclious") or coin new ones ("slippety"); adults will easily sympathize with the patient and long-suffering Chalk.'
- The Bulletin of the Center for Children's Books

'the art made me do a bit of a happy dance...'
- Stacy Dillon, Booktoptia.blogspot.com

'It's no secret that I love comics, and any book that's comic-like gets extra love from me. Chalk & Cheese is one of those awesome picturebooks that straddles the line.'
- Rachel Hochberg, Letterrip.wordpress.com

'With its comic book style art and its thoroughly likeable characters, this is a picture book that children will come back to again and again.'
- Through the Looking Glass Children's Book Reviews