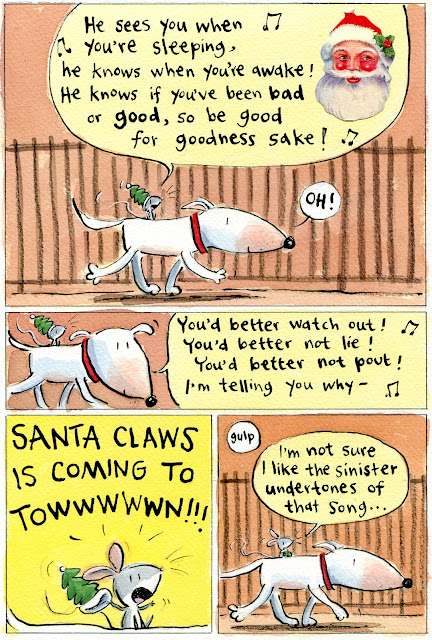 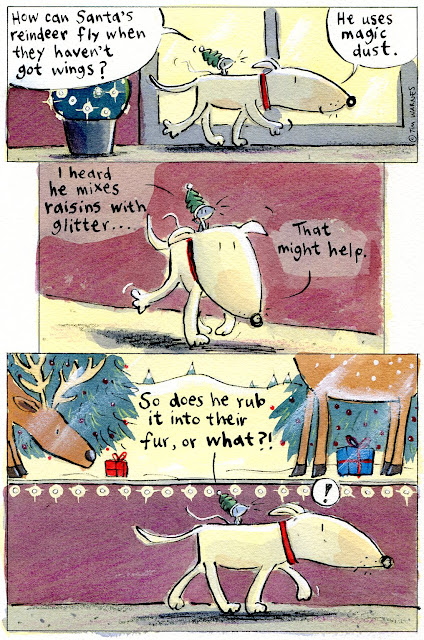 I hope you've enjoyed this week's Chalk & Cheese Christmas Special! There'll be another suitably Christmassy offering on Monday!
Posted by Tim Warnes at 00:00 No comments: 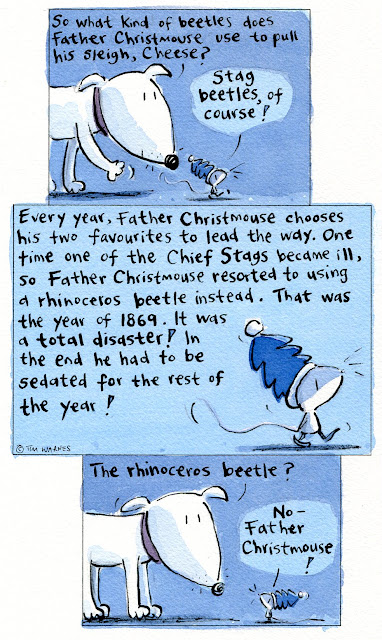 In case you're wondering what a sleigh pulled by magic beetles looks like, check out The Legend Of Father Christmouse from last year. 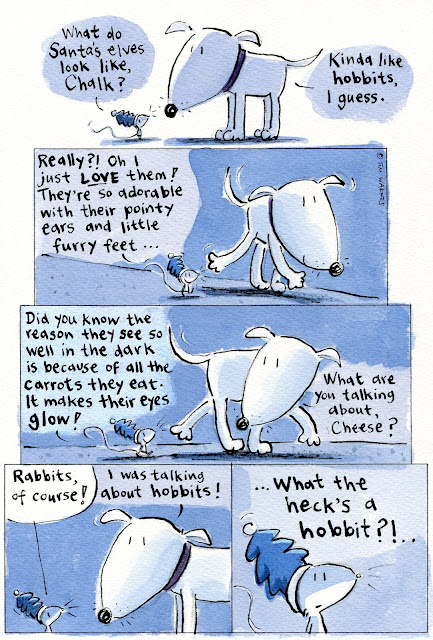 Join me tomorrow for another C&C Christmas Special!
Posted by Tim Warnes at 00:00 No comments:

The Chalk & Cheese Christmas Special is running all week, Monday to Friday! Spread some Christmas cheer and share the strips - you can email the strip to a friend or share on Facebook or Twitter by clicking the icons below. 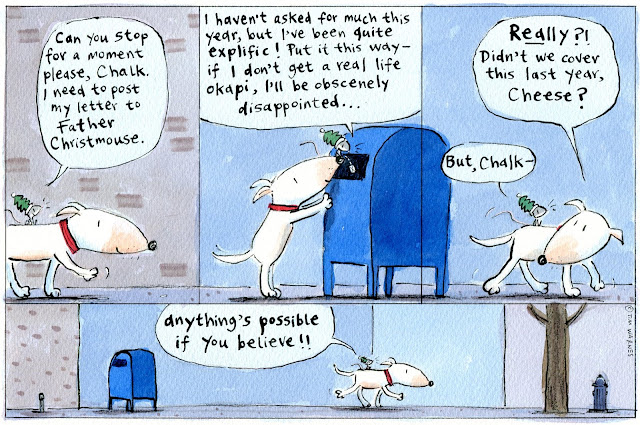 If you weren't following C&C last January, take a look at this strip - Why? and Faith Renewed.
Posted by Tim Warnes at 07:36 No comments: 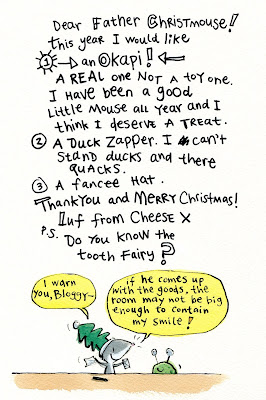 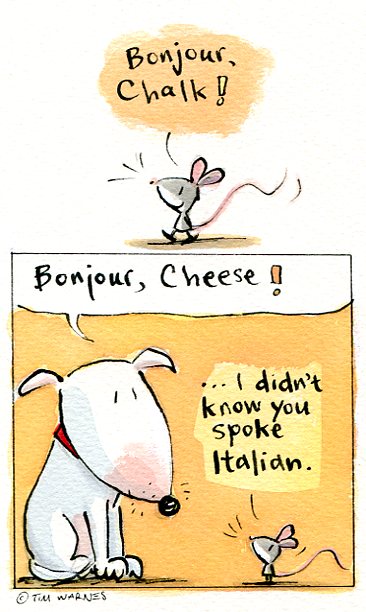 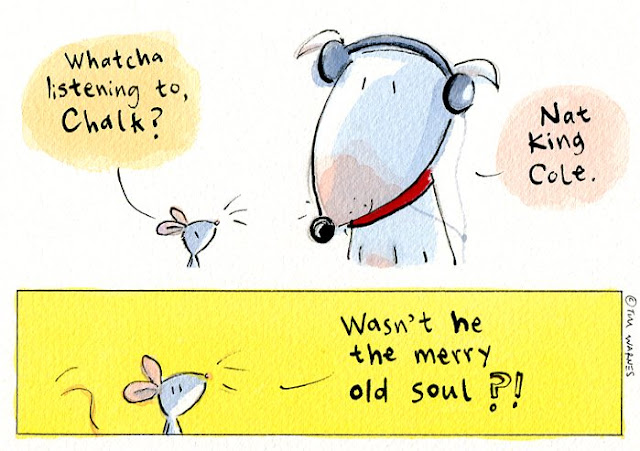 For more okapi themed strips, click on okapi in the labels below.
Posted by Tim Warnes at 00:00 No comments:

Cheese LOVES okapis. He even asked Father Christmouse for a pet one last year - but had to make do with a toy one. Life is full of bitter disappointment. 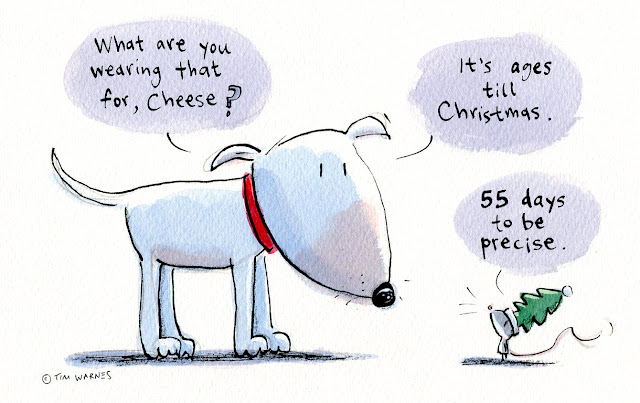 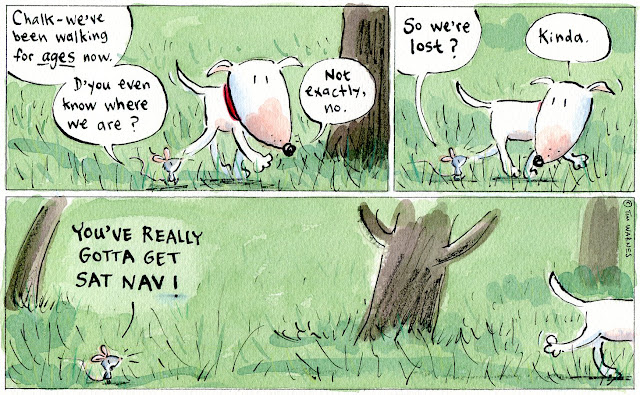 In Which Cheese Finds Something Interesting

Whilst I love creating these comics, I'm at a point where I can't justify the time spent on them, as I have some oh-so-tight deadlines to meet on some paid book projects. So it is with a big *sigh* that I'm going to have to temporarily reduce the strip to just once a week, which I shall post on a Tuesday, just to throw you all (apparently general morale is at it's lowest on a Tuesday, so maybe my comic will give some of you a much needed boost)!

I'm not sure how long this new arrangement will be for - I expect until at least mid October. Rest assured that the C&C bit of my brain will be whirring away and scribbling down ideas and scenarios in the meantime.

If you're new to C&C, or just need reminding, then check this out!

I'm taking some time out next week, so the next C&C will be on Monday 10th September.
Posted by Tim Warnes at 00:00 No comments: 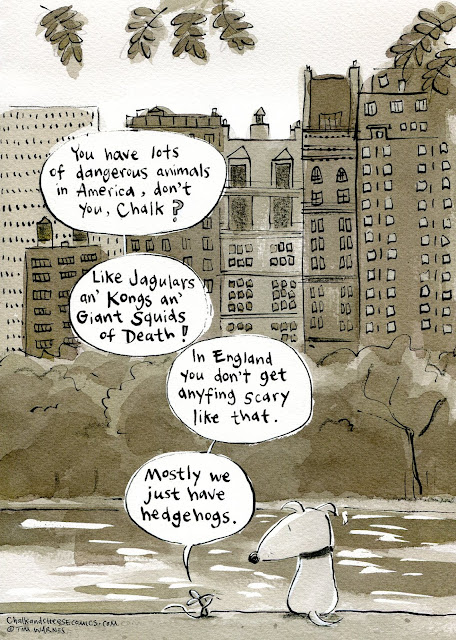 The Watcher In The Water 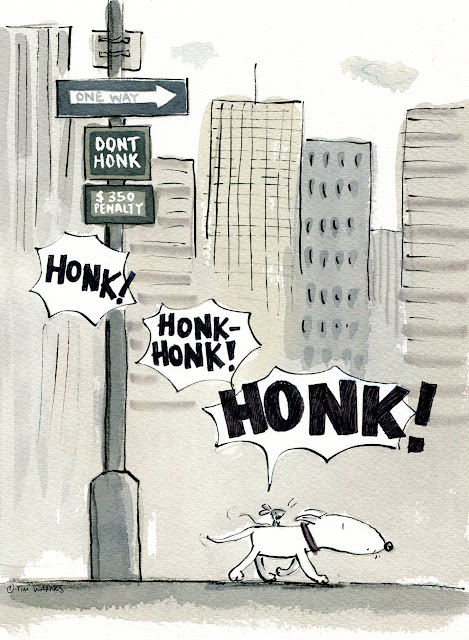 A Little Something (rpt.) 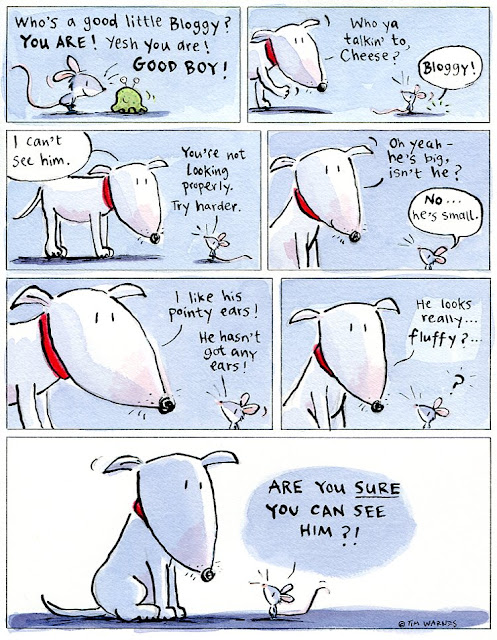 This week I'm giving myself a break and repeating some of my favourite earlier C&C comics.

For those of you who (like me), enjoy looking 'behind the scenes' as it were, here's the original rough layout. 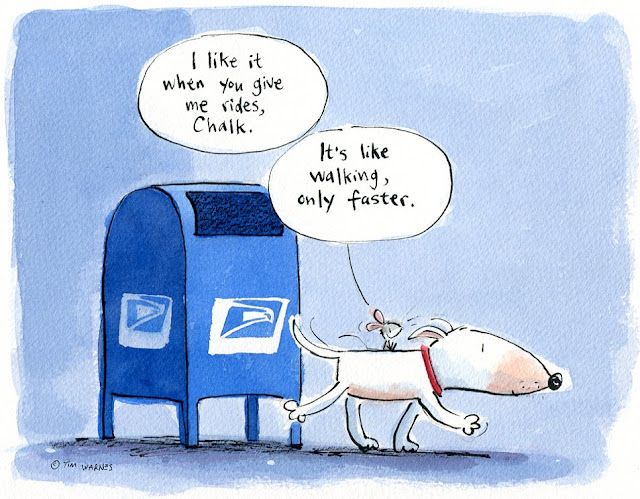 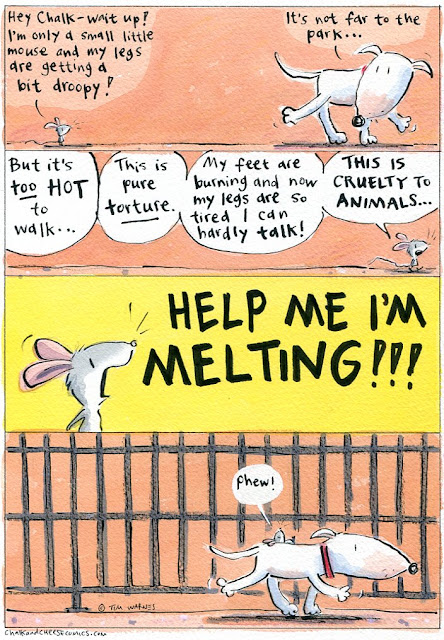 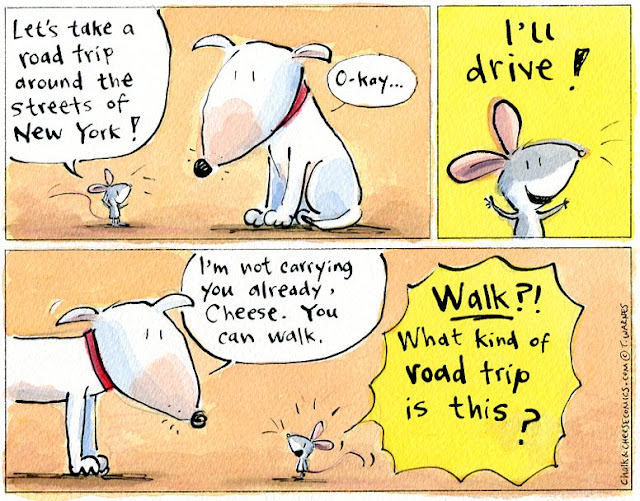 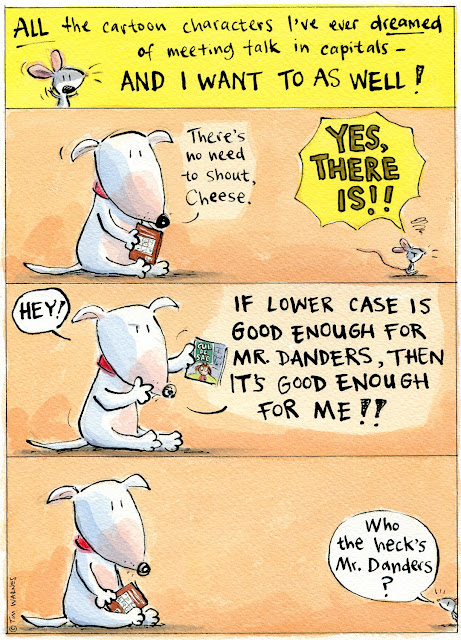 Chalk & Cheese met Mr. Danders the guinea pig in my strip that was done for Team Cul de Sac. This is a great fundraising effort for Parkinson's disease, in support of Cul de Sac cartoonist Richard Thompson. If you are able, please buy the book or consider making a donation. 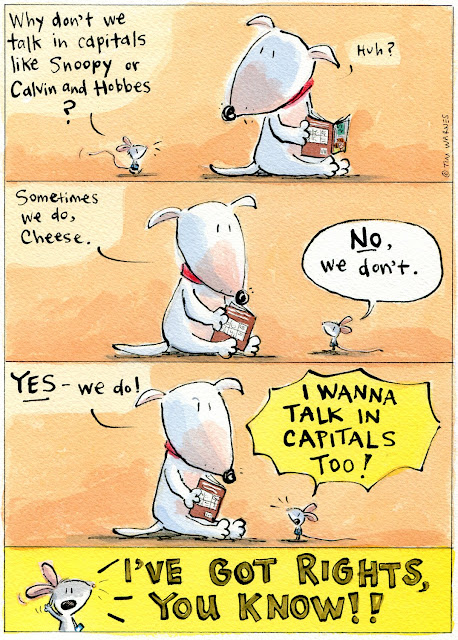 Marya Jansen-Gruber, editor of Through the Looking Glass Children's Book Review - this link takes you to an interview that she did with me earlier in the year. Congrats, Marya; the art will be on it's way!
Posted by Tim Warnes at 09:23 No comments: 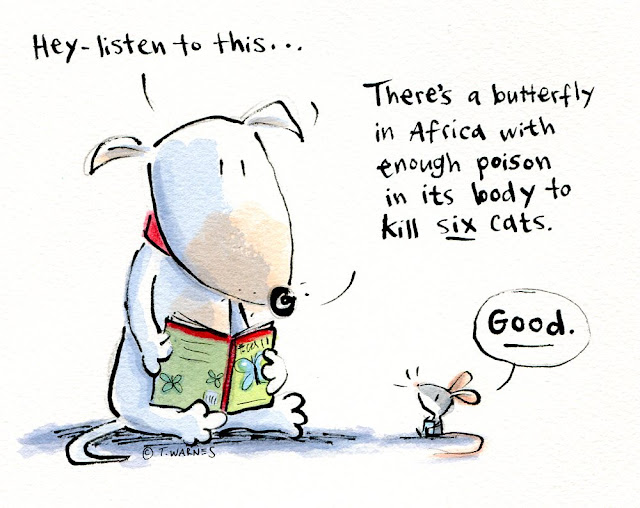 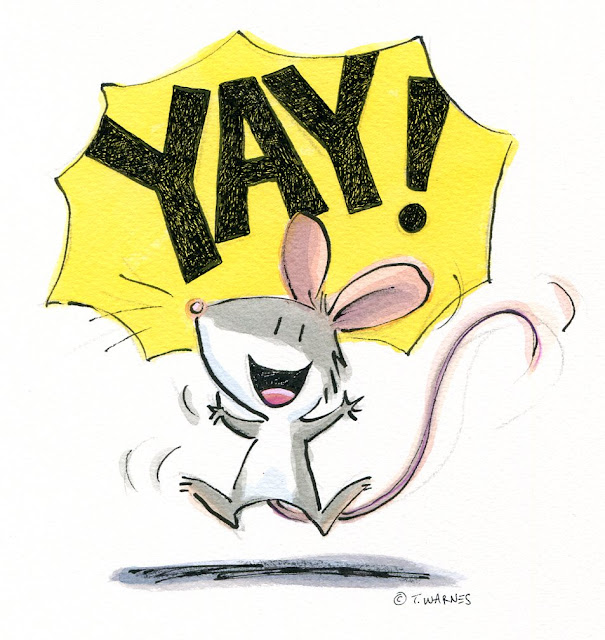 When I started Chalk & Cheese Comics I had no idea how it would pan out. I didn't realise then that Cheese would become so obsessed with okapis, or adopt the mantle of dark Sith mouse, Cheese Vader. I hadn't envisaged Chalk sitting up holding a book reading; I didn't know that porcupines float.

At the moment of writing, C&C Comics has had 20,873 page views spread across 41 different countries, which I find amazing and hugely encouraging. Thank you to everyone who shares the strip by word of mouth, email, Twitter, Facebook etc.

To celebrate I'm giving away this original piece of art - just go to the Chapman & Warnes Giveaways site for details.

Who knows where the next 12 months will take us (certainly not me, as I haven't done Friday's strip yet!)? 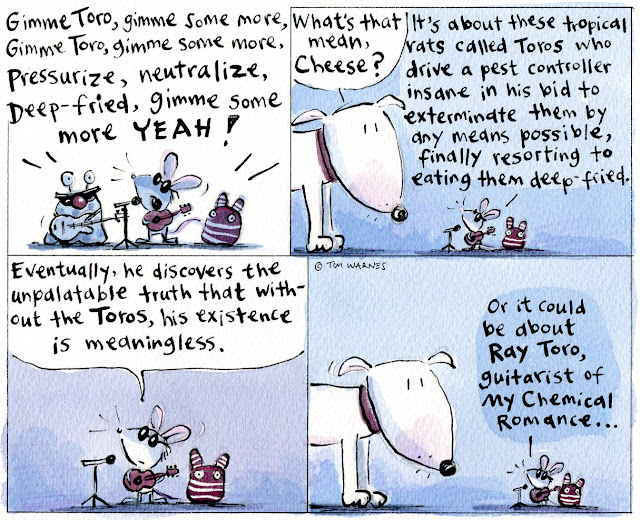 Wikipedia: The toros or brush-tailed rats, genus Isothrix, are a group of spiny rats found in tropical South America, particularly in the Amazon Basin. Follow the link from the C&C Facebook page to see a picture of one.
Posted by Tim Warnes at 00:00 No comments:

You Think I Ain't Worth a Dollar, But I Feel Like a Millionaire 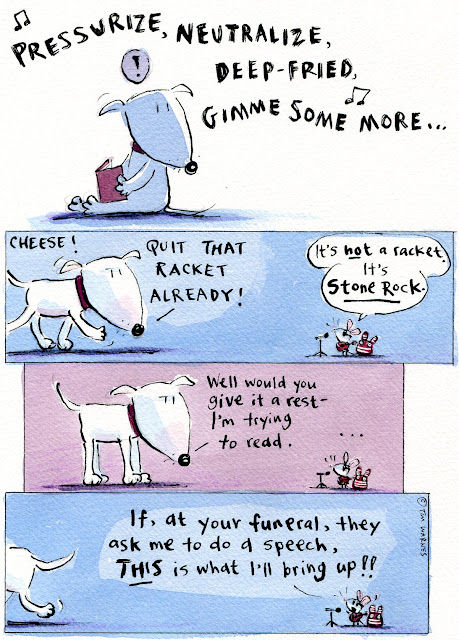 You can hear what Cheese is playing over on my C&C Facebook page.
Posted by Tim Warnes at 00:00 No comments:

Return Of The Jedi 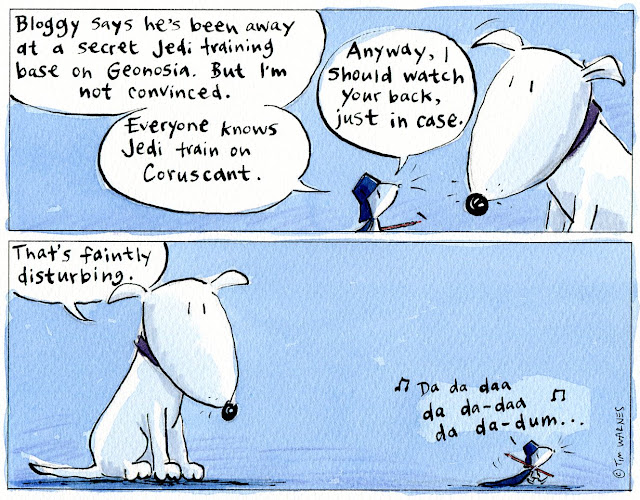 STAR WARS and all characters, names and related elements (lightsabers and stuff) are  trademarks of and © Lucasfilm Ltd. Cheese Vader is my idea.
Posted by Tim Warnes at 00:00 No comments:

And the winner of Bunnifing is...


Shirley Ng-Benitez.! Shirley is an illustrator and has been following C&C for some time now. Congratulations, Shirley - look after that cute Bunnifing for me.

Thanks to everyone who entered!

There's still time to win yourself the real life Bunnifing - check out the new Chapman & Warnes Giveaways site for details. Entries for the draw must be received by midnight tonight (UK time).
Posted by Tim Warnes at 00:00 No comments: 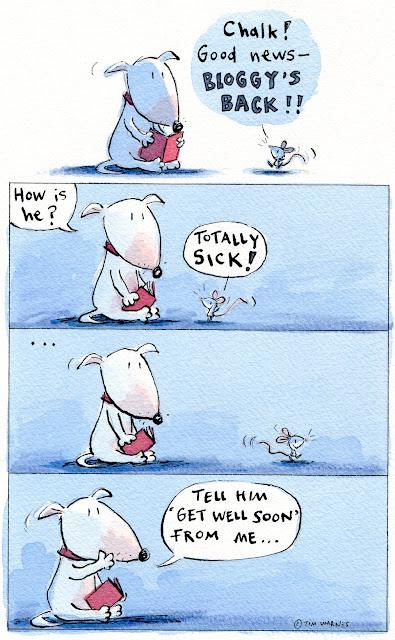 If you're new to Chalk & Cheese Comics, you can find out more about Bloggy by clicking on the label 'Bloggy' at the bottom of this post.
Posted by Tim Warnes at 00:00 No comments:

Email ThisBlogThis!Share to TwitterShare to FacebookShare to Pinterest
Labels: Bloggy 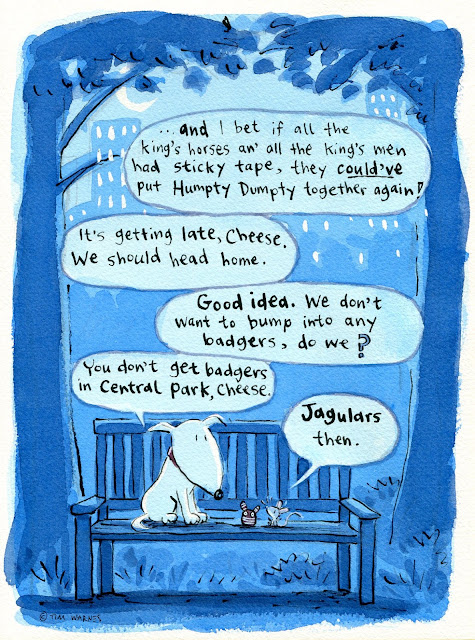 Would you like a Bunnifing all to yourself? I have one to give away - check out this exclusive giveaway over on the new Chapman & Warnes giveaways site!
Posted by Tim Warnes at 00:00 2 comments:

Don't forget you can get your hands on some original C&C art by bidding online in the Team Cul de Sac auction, raising funds for Parkinson's research. The current bid is $42.00 (a snip compared to the 1.3m euros recently paid for an original Tintin cover!). The auction ends on June 10th.
Posted by Tim Warnes at 00:00 No comments: 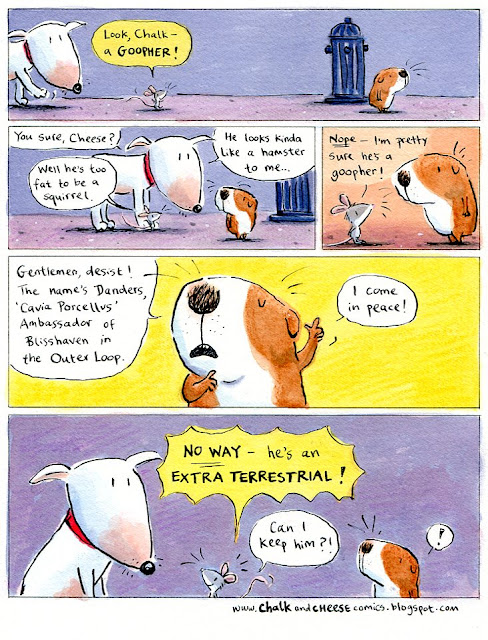