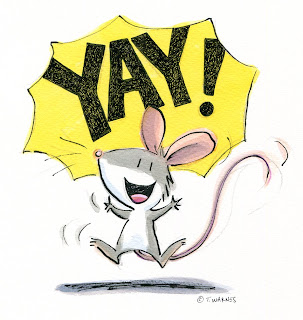 Last year I had the immense honour of having Chalk & Cheese included in the Team Cul De Sac  book, a fundraising effort in aid of Parkinson's research. My strip was selected to go in the book alongside many notable cartoonists, including the creator of Calvin and Hobbes, Bill Watterson, whom I shared a spread with (I was so pleased my surname began with a W...!).
The project was conceived by a guy called called Chris Sparks, after Richard Thompson, the creator of the wonderful Cul De Sac strip, was diagnosed with the disease. To date Team Cul De Sac has raised over $110,000.00, and the book has just
been nominated for an Eisner Award!

And finally, here's my contribution from the book: Chalk & Cheese meets Mr. Danders.
Posted by Tim Warnes at 00:00